Three Legon students were allegedly caught at the Accra Mall yesterday allegedly trying to steal underwear from one of the stores, Mr. Price.
They were either made to pay for the items, or the goods were reclaimed ( there are conflicting reports). Thereafter, as punishment,the women were made to crawl from the store to the main mall entrance, as people called out taunts, and videoed.

Where do i even begin with this?..
So the ladies were caught. Great. At that point, im quite sure procedure demands that the mall security detain them, and call the police.
What you are NOT allowed to do is force them to crawl their way out of the building. Since when do rent a cops have those kind of powers?
Those girls are well within their rights to actually sue the mall admin for a violation of their civil liberties.
Beyond that though, its really high time that we understand as a country that mob justice as punishment is unacceptable, not to mention illegal.
These particular girls were caught red handed, it seems.. 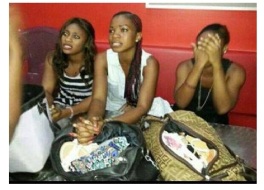 But how many times have we heard a story of men being beaten to death for ‘theft’ only to find out later that it was a case of mistaken identity?
And being a mob scenario, no one is ever made to pay for having murdered an innocent person.
I absolutely understand the frustration at leaving things in the hands of the ghana police and court system. Both are broken and often useless. But the alternative is much, much worse. If we want to call our selves a civilized society, then we must act as such.
A few more things. Why do Ghanaian security types always get so frighteningly power drunk? Whether its a night club bouncer, security man at a bank, or the ultimate, the security guards at the British or American Embassy, give them a uniform and place them at an entrance and suddenly they transform into Gestapo. Aden?? Frankly the police themselves don’t seem to understand that a uniform does not give you carte blanche to be abusive and ignorant with impunity.
Now onto the thieving-ass girls themselves. Hair done, nails done, make up on point, clothes on point… but you are at the mall stuffing stolen goods into your (faux?)FENDI bag? Is it that serious? Do you need to keep up appearances that badly? One would imagine, that as a university student, the only thing you should ever be caught stealing, if it came to that, is text books. Such nonsense.
People, if this is not the embodiment of girls abre, i dont know what is.  The struggle is definitely real out here.  EVERYONE is going broke, but dammit they will continue to look the part!
A shame….
What say you?